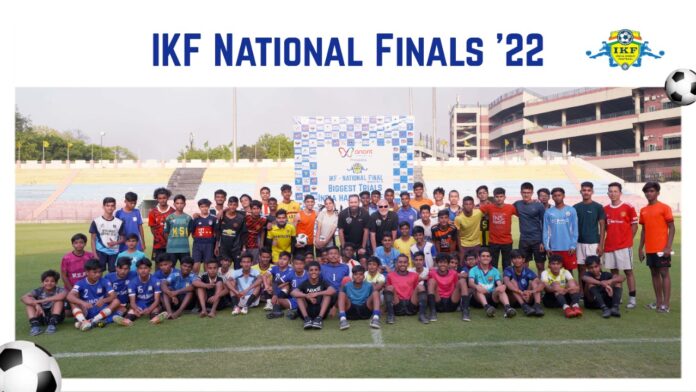 The human species evolves every minute of the day and their new creations and mindsets create a vast variation and an increase in the technological world nowadays. Everyone is basically screaming nowadays about how technology is taking over our lives and that is why its so important to realise how much of a vital part it is for us to still stick to entertainment and other chores within a physically present field. One may find many apps and games regarding anything fun they want online, yet have you ever thought of a digital platform which would connect you through your physical world, act as a bridge and not be a barrier between you and your dreams?

Maybe, and so this thought arose into the brilliant minds of the founders of India Khelo football’s non-profit sports platform, which works to link Indian kids and their dream to pursue, and play football at a universal level. Their main motto is to build a strong community, to nurture and aid, make the kids ready and set to sail the world beyond by nurturing their roots with professional football, eventually giving them the opportunity to expand their talent with the world, learning from the best.

Based in Mumbai, Maharashtra, it was founded by Hitesh Joshi and Phani Bhushan who together have a vision for and their only motto is to present exciting and enlightening young football players with the opportunities to grow and find themselves a place through the help of this technological world into a one real of their own. They want to see this as a stage for all the budding players, who undergo various challenges that stop them to pursue their dream, to not feel down and rather be supported for the laurels their talent would bring to them as the future sportsperson of India in the World football leagues and such.

Hitesh Joshi, a former co-founder of a renowned football club and academy in Mumbai, has had his career date back to working with the Maharashtra Government promoted company where he spearheaded the skill development products & projects and was soon appointed as the part of Chairman’s office at ‘Reliance’, looking after substantial HR strategies. Whereas, Phani Bhushan, is an enlightened IIT Alumnus, a serial entrepreneur and a die-hard soccer fan who on the technology front, using his innovation “Anant Computing” is trying to create a truly digitally inclusive India while also at the same time dreaming to take Indian sports talent to the global stage.

This venture is spreading across India, collecting kids with the talent and love for football, organising tournaments and selections through their portals, to just seek into the busy lives of people and enhance their minds with the wit and strength of a curvy road to physicality and football. India khelo football’s phygital platform has partnered with many European associations such as ProSoccerGlobal,PalamósCF, Perfect Football, PFSA (Professional football Scouting Association), and Sportsmate 360.

They have organised various events across the country, such as the India’s Biggest Grassroot Trial 2021-22 which covered nearly 17 cities, around 105 national finalists, among which 7 players were scouted for the road to Europe. I-League and ISL clubs were also the part of the India’s biggest grassroot movement wherein more than 20 Kids were scouted by ISL and I-league clubs, putting out that talent and love.

”All activities that we do must contribute towards creating a structured career path for aspiring football players and we believe to become the largest feeder of Indian football talent to the world, ensuring that India qualifies for 2034’s World cup. While alongside a boosting goal to create 1 lakh + professional football players in India.”, says India khelo football.

This is the first platform in Asia which is deploying the Phygital model for talent identification at scale and generating a stage for young talents. But being a non-profit initiative, they do have their own set of challenges and risks to take, that they want to be well equipped in order to aid the kids of our country, who are now relying on the support and a hope of platforms like India Khelo football.

A founder of the global print media company- “Nida Fatima”.

With petdel movers, transporting your pets is not anymore something you...