Home SUCCESS STORIES How to build up a successful business – story of MBA Chaiwala. 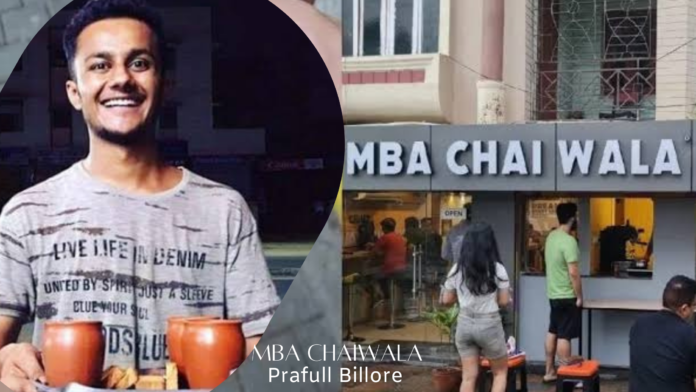 Many dream, but a few work consistently and achieve it. Prafull billore is a self-made entrepreneur and businessman who owns a successful venture called ‘MBA Chaiwala’, short for ‘Mr. Billore Ahmedabad Chailwala’. What started as a small stall for selling ‘chai’ is now a multi-millionaire company, with almost 50 outlets in pan India itself and a goal of 100 till the end of 2022.

He started MBA Chaiwala unnamed in 2017 inorder to start with his dream of doing something big. Post his bachelor’s, he focused himself into giving various tests for getting an MBA, but it didn’t peak his growth. So, he quit his MBA, and moved to a different town  and started looking for something that’d help him gain insights and grow.

He is a small town boy, from the state of Madhya pradesh full of passion and determination to make something of himself. Being from a small town, he didn’t have much growing up yet his dreams were bigger than his situation. After graduation, with his savings he went on travel and to explore himself which led him to  Bangalore where he felt comfortable and started working at a minimum wage in a McDonald’s franchise, while also enrolling himself in a local MBA college for his parents’ sake. He says it made him understand practical business by meeting new people, and exploring what he could do.

He became caught with the concept of beginning his own food business and took the plunge of starting a roadside thela to begin his entrepreneurial journey in Ahmedabad. Inspired by such, he was determined  to start something of his own, something to make his identity and his final thought aligned with ‘chai’  because chai had been the one drink which had his back, and who got him through those late night study sessions and stressful days.

The tea production and consumption in India has an exponentially increasing market, with around 2 million tons of tea distribution. Tea can be found in almost every Indian household as a welcoming or refreshing beverage and holds an important value in this sector.

“No food or beverage other than chai is consumed throughout India. I didn’t know how to make one but I knew everyone would drink it. If I wanted to start another business, it would need an investment of a minimum of Rs 1 lakh, and I didn’t have that kind of money. With Rs 8,000 in my pocket, I started selling chai roadside,” adds Prafull.

He mixed this simple Idea of selling chai with communication and digitalism, converting a mind business into a successful one through his consistency and not giving up attitude. Prafull believes in starting small and reaching big. Moving with small steps, disappointment and failure is inevitable but consistency is the key. He attracted customers and investors through his knowledge and organising various events and games that involved people to interact and eventually gained more exposure. What started with a roadside stall is now branched into cafe’s at various cities of India.

‘Great things come to those who wait’. Prafull used his business and marketing skills to expand his business. No business is big or small, the way of presentation is big. Apart from being an entrepreneur, Prafull is also a business coach, who talks about his journey, actions, and success, while also guiding and imparting his experiences in business marketing to people.

A founder of the global print media company- “Nida Fatima”.

Chandni devgan winner of Mrs India one in a million...