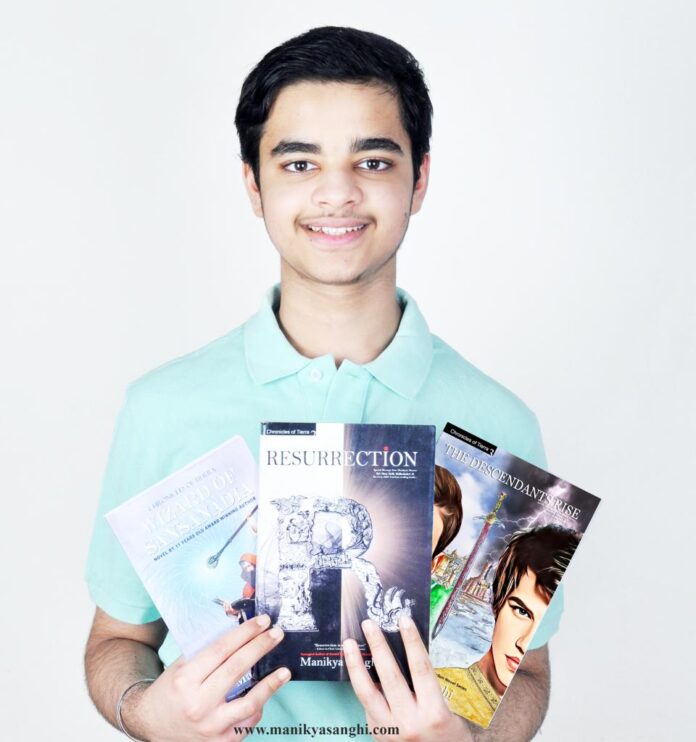 Manikya Sanghi, a child author recently made India proud by receiving two World Records for Screen Writing at the age of 13 years. Manikya has been intuitively narrating original stories since a very young age. As a child he wrote his first story book at 5 years of age, his first fiction novel at 9 years, and till date has published 6 books including a Fiction Novel Series titled Chronicles of Tierra.

Manikya has successfully studied and completed several courses in screen writing. He also made the most of the opportunity he received to attend sessions with many practicing screenwriters, directors and producers of famous films and acclaimed web series.

With the knowledge and skills gained through various courses in Screen Writing; and attending sessions with many practicing screenwriters, directors and producers of famous films and acclaimed web series; he is now writing episodes of Web series and comics to spread the positive messages contained in his Novel Series Chronicles of Tierra.

Here is an exclusive insight into the story which has not just been inspiring and entertaining readers worldwide, but also helping them overcome self-doubt, inner weaknesses and finally move forward with greater zeal positive path in life. It has been also known to subtly address the challenges faced by people of all ages and various sections of the modern society.  Thus all the novels of this series has found wide readership in children of 10+ years to adults, alike.

Chronicles of Tierra is a thrilling epic fantasy tale set in the planet Tierra. Long Ago, when two energies of the universe crashed upon it, life was born on the planet, and many different races and creatures came into being. For some time, peace and harmony reigned between them all. But then, something changed. Certain darkness clasped itself around one of the energies, and a celestial war began. But it did not remain only to the skies and heavens above. Along with it, everything turned about on Tierra too. A vile shadow spread over all the lands, as war and chaos reigned everywhere. Kin fought kin, kingdoms fell and villages burned. Many it corrupted and took along with into the abyssal darkness. The world changed. Though not all was lost, and there were those who still knew the light remained.

Ever since then, the fight between these evils and those protecting themselves from it continued. The story contained within the series unfolds in the Third Era, and tells of the many events that took place in it, and all those because of whom they came to be. It further continues with unexpected turn of events at the turn of every page, and something new every time which surprises you about the imagination, detail orientation, inner maturity and writing prowess of the young author.

We couldn’t hold ourselves back from reading all the novels which are now available online worldwide. Like many other readers, we also felt that as you go deep into the story, along with the exciting entertainment, you find that it urges you to look within yourself, discover yourself, help yourself to overcome your shortcomings and explore a more joyful, fulfilling, successful life.

Chronicles of Tierra is an epic creation by Manikya Sanghi at such a young age. Every word in its novels is worth reading and certainly is worthy of all the praise it is receiving.

Manikya, we are now eagerly looking to read the fantastical Comics and see the Webseries of ‘Chronicles of Tierra’, and wish you the very best for your future endeavours.

You can now more now on: www.manikyasanghi.com