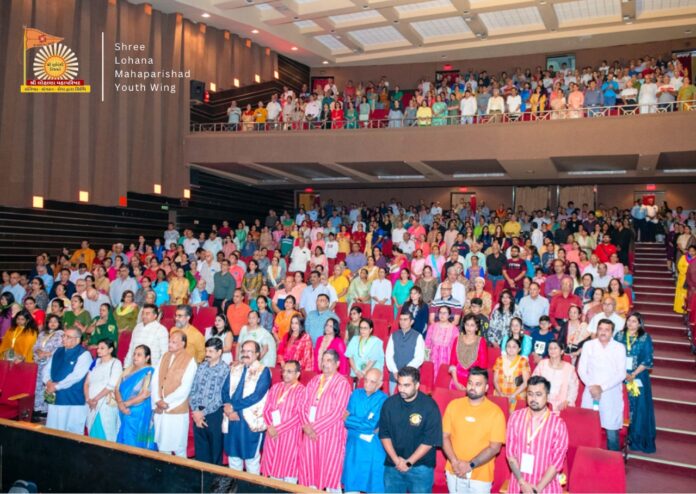 On the occasion of Jalaram Bappa Jayanti, Shree Lohana Mahaparishad’s Youth Wing had organised “Sathvaro Radhe Shyam No”, a devotional musical saga to bring the Lohana community residing in Mumbai together and celebrate the special occasion.

The Show conceptualised and produced by Hiren Parpani has created a buzz by becoming one of the India’s biggest Broadway style musical show. A unique presentation for all the Radha Krishna lovers being an amalgamation of songs, music and dance. Acclaimed Singer Nilesh Thakkar along with Arpita Thakkar and a majority of Lohana artists made sure everyone in attendance had a great time. There was a special Jalaram Bappa Jhakhi act which was the highlight and a special surprise to the delight of Lohana Audience.

“This is the very first time an event of this magnitude was planned and executed in a weeks time. It was a pleasure addressing a huge Lohana audience on this special day and updating them about the LMP activities carried out in India and abroad. My terms core focus is Lohana community’s social well being and through connecting over 3.5 million Lohana’s all around the globe, we want the community to come together and work for the greater good. Youth Wing seems to be fully activated in Mumbai and i wish the entire team a great success for many more successful events in future.” says Satish Vithlani.

LMP Youth President Chintan Vasani said, “Its a 100% team effort and we all had a great time organising it. Our Mumbai Youth President Prashant Vithalani and the entire team had distributed the work load. Harsh Thakkar and Khyati Vasani played a key role in Ticketing as we were booked 200% on the first two days of announcement. Being the first show, we wanted to set a tone for the LMP Youth. It was an initiative of LMP Youth member Nishit Vasani who played the lead role of Krishna and we insisted he had an act in today’s event too. We are planning such gathering in every LMP Zones in India and abroad. We will be having our upcoming LMP meeting in Raipur in December and Zone 11 – Chattisgarh and Madhya Pradesh is planning to host the LMP organisational body in Raipur.”

Speaking to Event sponsors, Dr Bharat Vasani and Adv. Deepak Thakkar, ‘’The songs, performance and artistic creations are created so exquisitely, that audience got mesmerized. We are proud to be associated with LMP for organising an all Lohana gathering which to our knowledge is for the very first time in this side of Mumbai and we are very proud to welcome the LMP team to our home.”

The day ended on a very high note with LMP Youth member and budding singer Ronak Thakkar along with his father, Nilesh Thakkar giving a tribute to India with a special performance. The LMP youth members had the India flag flying high all around the venue. This evening was a memorable experience for everyone in attendance.