Home SOCIAL STORY Smashed by the jungle drives and camera in hand- A regular day... 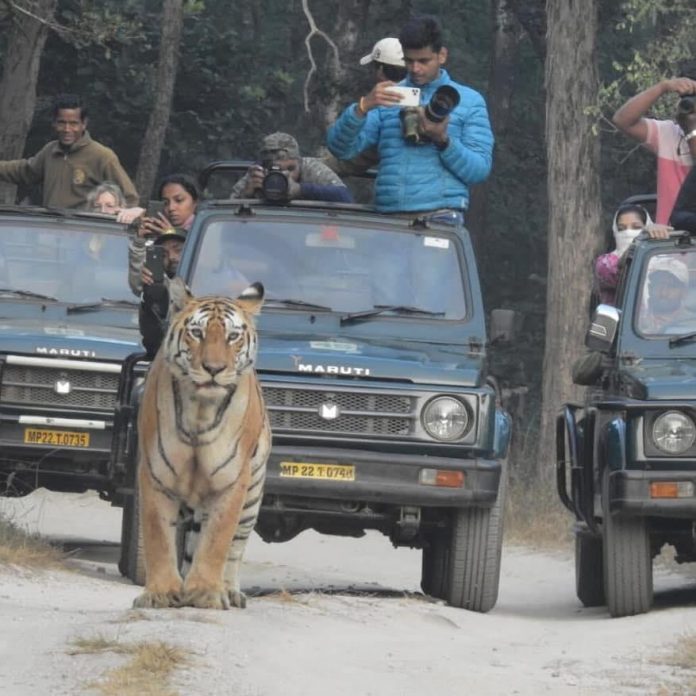 The best view of wildlife isn’t keeping them behind cages, it is seeing them nurtured in the natural environment. People must understand that no one owns the planet earth, not even humans. We belong to it and share it with other millions of species and it is our duty to save them from getting exploited. Monu Dubey is one such wildlife lover who is known for his passion for the mighty Tigers of Pench and saving them in his own way.

This story is about one young man who may not be popular in terms of name and fame, but that isn’t necessary to become great. It is the tiniest acts or achievements for the welfare of others that can make you feel great and that’s what matters most. He is a twenty-six years old wildlife lover Monu Dubey. He is known for his deep connection to wildlife, but surprisingly he isn’t a researcher or forest officer nor has any NGO for wildlife and he is not even any of those volunteers for the Save Tiger mission. He is a wildlife tour operator and the owner of a resort situated near the Pench National Park in village Turia, MP.

At first, there seems to be nothing great in it, hence there must be thousands like him within the country’s forests. They are nowhere near great as they are making money out of wildlife. Wildlife tourism has caused nothing but disturbance to the innocent beasts, no one thinks about the disturbance in their natural ecosystem and letting the poor animals live in peace. But Monu’s love for Indian Tigers is unique, his frequent interactions with them never disturbed any beast.

Before learning why Monu is conserving wild animals, we must know why we need to conserve them. May it be a tiger or a fish or a flamingo or may it be humans, rules of survival are the same. The species is to be given enough space & food along with some privacy and then they survive on their own, it seems simple, isn’t it? But when applied to any other species than humans it’s not that simple as apart from us no other species is privileged with skills or products of life’s comforts and this is why Monu is great!

Let us dug deeper into Monu Dubey’s past and then you would know why he’s doing all this. Some eight years back, he used to be a young, lanky, and smart guide in Pench National Park. Being too young for the role, he was very enthused to show the tiger to the tourists and at times even reckless, especially when it’s the time of tiger sighting to his tourists. He must be hardly eighteen years old back then and had just started his career with wildlife as a guide. It can be said that at that age we all are enthused & reckless but Monu was something more than that.

He was confident and loved his job, not just because he used to get paid but for what he was doing i.e. making people see a tiger. We know that wildlife is not just tiger sighting, yet a fact remains that 90% of tourists come to forests to see the tiger. Even the government’s tourism department also advertises tourism on the tiger only. But it is an inevitable truth that very few can spot such ferocious animals in their natural environment. The first-timers in any tiger park or forest have this temptation, if they spot them even once, their love, affection, and interest may arose to visit the forests and then it gets conserved & indeed tiger has that magic in it!

Monu knew this fact & that’s why he has this enthusiasm which sometimes goes overboard to make his tourists see the tiger. He couldn’t get over the fact that the beast which isn’t easily spotted by hundreds of others was frequently seen by him. Years passed, and he started capturing images of tigers and then the other species in the forest. In this internet world, he understood the importance of sharing these images with the outer world.

This young boy who was getting matured knew just guiding tourists all the time won’t take him where he wanted to go. Hence slowly he started making friends with tourists. He was a small guide so sometimes if he won’t have the turn to serve tourists, so he couldn’t go into the forest that day and that was a hurdle for his ambitions. So he targeted owning a gypsy by himself & then decided to own a stay place for the tourists.

Monu inherited except a small piece of land near forest gate in Turia. The most important aspect for the hard-core wildlife for their forest trips is a clean, decent place near to entry gate as which makes commuting to the gypsy’s saves time as well. If you enter the forest first then chances of big animals such as tiger, leopard, and sloth bear are more as their main movement time is early hours of the morning.

Monu’s place was perfect as luxury isn’t a necessity for wildlife photographers, all they need is convenience & cleanliness. He knew this due to his experience with many wildlife tourists. He induced this idea while making the resort which has become instantly popular among wildlife photographers. He understands communication promptness and its value in the service industry. With his past experience, he knows all ins and outs of the wildlife community.

He could now be seen managing his business at a larger level through the power internet and community building. He even polished his skills in photography and has clicked some great shots, one of which has been won an award in Sanctuary magazine. The resort he owns has 10+ rooms which are nice and cozy. The rooms are mostly full of tourists both in and off-season. Monu has employed nearly some thirty-odd youngsters from nearby villages around Pench forest in this process.

Monu follows the actual conservations’ solution; as only if the people around the forests survive happily with the forests then they only will make the forests and the animals within survive and grow. It’s very easy to sit in a big city, buy some fancy gear of photography and click wonderful images for applauds and call ourselves saviors of wildlife. But it is youngsters like Monu who are the real saviors of the wilderness as they decide to stay with the forests and make both of them survive. He is an entrepreneur with a business mind and has the heart of wildlife.

As in forests they say, every moment has its timing, so this is! There is a great life ahead for Monu Dubey, he has no plans to stop here as he thinks his job has just started. The threat of extinction has been increased not just for tigers but for every single species of birds, trees, animals, and fish. It is we as humans and people like Monu who are the Ray of Hope.

Flash sales of Amazon and Flipkart may no longer be available.

Social Artisans and craftsmen get back to work with Sybersify