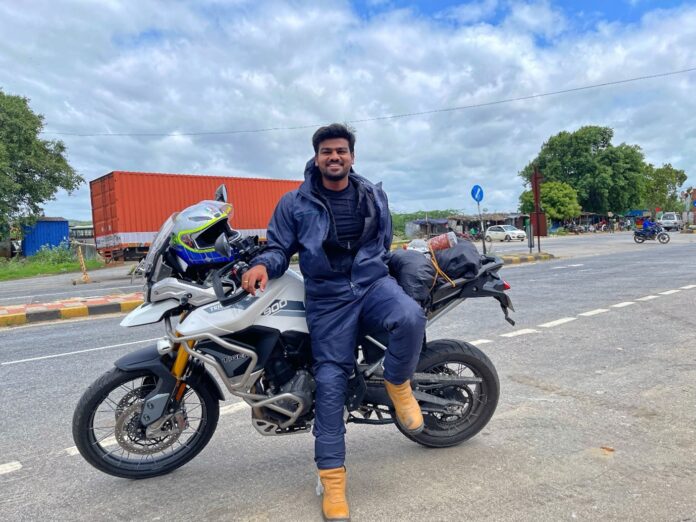 Have you ever heard about Motovlogging?

If not, then read this story which will truly inspire you and add more motivation & excitement to your life!

Bayya Sunny Yadav hails from Nuthankal Suryapet District of Telangana State and was brought up in a middle-class family-his father has a pharmacy store in Nuthankal, his mother is a housewife, and his brother Bayya Kalyan Yadav who is a professional Kabaddi player representing the state for national tournaments.

As a child he had to face many challenges, a very average student, and being from an average family, he has seen many adversities since childhood like many other kids, he had a passion for motorcycles from the age of 13.

To give a go to his passion, he started driving his father’s motorcycle in an empty playground and when he turned 18 years, he took a driving license and bought a second-hand Yamaha RX 100 bike for Rs. 6000.

After using the bike for 2 years, he bought a brand new KTM RC 200 motorbike in 2016 for Rs. 2 lakh – was quite expensive looking into his family’s financial conditions- but his parents bowed to his wishes and bought the motorbike.

Having an interest in moto vlogging, he started his own YouTube channel in Telugu, and being very unique, no one had thought about his idea.

In November 2017, he bought an action camera from a Chinese website and started moto vlogging. In his starting days, he took local trips to nearby places of 100 to 150 km but he did not get the views as he expected so he decided to take longer trips.

After some time, he had some family problems as his father’s health was not good so he had to stop posting updates for about a year.

“In December 2018, I took my first long ride to Vizag Araku from my hometown Nuthankal which is around 2300 km, and besides exploring newer views, my subscribers also increased. I started going to newer places on my bike like Tirupathi, Yadagirigutta, Gandikota, and Hampi in Karnataka,” says Bayya Kalyan Yadav.

In 2019 April, I started my rides towards more southern parts of India, sometimes even riding for 10 days and with new avenues of my channels, I completed 1 lakh subscribers, he adds.

“With this success and the increasing subscribers, I planned to take even a lengthier ride to Ladakh, which was also one of my dream rides in June 2019. I started from my native place Nuthankal and this 21-day motor ride changed my life and my YouTube career. After this, my subscribers unexpectedly reached three lakh within 2 months,” Bayya sunny Yadav said.

After this, I decided to become a full-time YouTuber and bought the necessary quality equipment for my videos on my channel. In 2019, I went to Nepal for 16 days and this was my first international ride. Since then, I had been doing rides across India, he adds.

“I also took a ride from Kashmir to Kanyakumari in 9 days in 2020. Till today, I have gone to 28 states in India and dream of taking a ride to 150+ countries in the next upcoming 10 years,” an excited Bayya Kalyan Yadav elaborates on his dream!

Bayya Sunny Yadav starts with a small dream but his dreams are big and he wants to cross all pan-country borders and succeed. Taking up such an unconventional career path is really difficult but very satisfying when we get recognition.

We hope his story is motivating and inspirational!

A New Writer in the Spirituality Genre, Deepika Manju Singh

How Gurdev K Aneja Led This Journey From A Failure To A Nationwide Inspiration?

Media Expo 2022 concludes with resounding success and a lasting impression on the Printing and Signage Industry.

With petdel movers, transporting your pets is not anymore something you...

THIS IS SMALL INITIATIVE FORM OUR SIDE TO HONOUR WOMENS- ANJALI(...