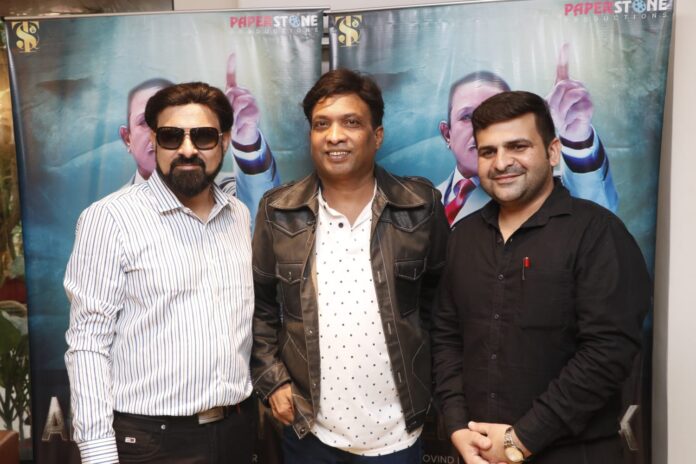 The poster and trailer of the film ‘Alien Frank’ produced by Paperstone Productions and Tinted Shadows were released on Tuesday at a grand event held in Mumbai among the film’s lead cast Govind Namdev and other people associated with the film. Well-known Bollywood actor Govind Namdev will be seen as Hitler in the lead role in the film.

On the occasion of the poster and trailer launch, the well-known Bollywood actor Govind Namdev said that he always wanted to play character of talented person like Hitler, Hitler who was a writer Hitler who was a photographer and a painter too. I really enjoyed playing this character and hope that the audience will also like my performance, he further said that I would like to thank the filmmaker Vine Arora, Gurudev Aneja, Rajesh Prasad and Nimesh Kumar for who deemed me suitable for this role and brought me an offer for this film.

It is noteworthy that this film is jointly produced by Vine Arora, Gurudev Aneja, Rajesh Prasad and Nimesh Kumar. On the occasion of the poster launch, Producer Vine Arora said, “Our film is an inspirational film, it entertains as well as gives a message. Our film will bring to life Hitler’s principles and ideals and some unexplored aspects that have not been exposed to the world till now. He will also come in front of the audience through this film, it will be our constant effort that we should produce such kind of film in future also so that the society gets a direction and condition, for this we are struggling as filmmakers and producers.

The producer of the film, Gurudev Aneja, while talking to the media, said that this film is one of the important projects of their production house, which is going to be released in front of the audience, very soon this film will be in front of the audience in the cinema hall, hope the audience will see this. You will be able to enjoy the film a lot, our entire team has worked hard day and night to make it, even further we will continue to produce good films for the audience, in which the message can reach the society along with entertainment.

Apart from well-known singer Anoop Jalota, artists like famous comedian Sunil Pal, Villain Lokesh Tilakdhari, made a special appearance at the poster and trailer launch of the film. The film will be released simultaneously all over India very soon.